Today I’ve received a brand new elePHPant. Will it survive in the hard ecosystem of my table? For the moment, it seems to be happy… 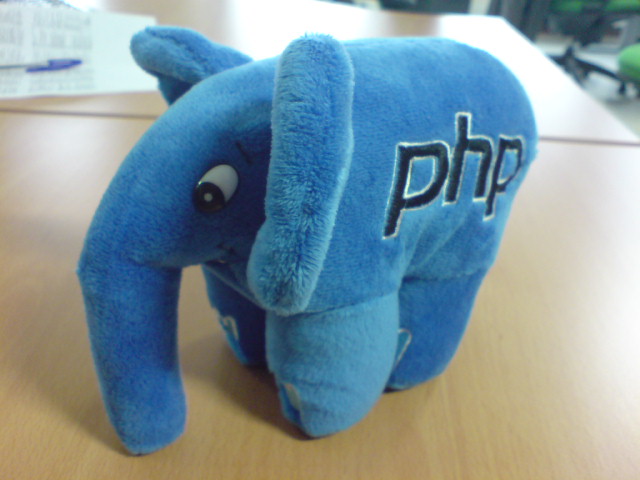 During last months I’m attending CAP (Curso de Aptitude Pedagóxica, Teaching Ability Course). The subject I chose was “technology”, and we are developing some projects in the classes.

One of that projects was about making a home made electric motor using simple materials: a magnet, coiling copper wire, metal wire, cables, insulating tape and cardboard.

Cut 9 meters of coiling copper wire, loop it around two fingers and wrap it with insulating tape to fix the coil. Make an axis with straight metal wire and pierce the coil with it. Then, using insulate tape, fix the two copper wires in parallel side by side as close to the metal wire as possible, but avoiding short circuiting. Mount the axis over a framework made with cardboard and place the magnet under the coil. Scrape off the insulating varnish from the copper wire and attach two cable brushes to them, trying not to make a short circuit. Connect both cables to a 9V battery, give the coil an initial spin and… what you see is what you get:

Today I was looking in Google for some information about the Xerox PARC Alto computer system. Alto was the first experimental personal computer having a mouse, a window environment, ethernet booting capabilities, sound, light pen, microphone, music keyboard and SmallTalk programming language for the affordable cost of US $32000 (in 1979).

While searching for that information, I found an article written two months before I was birth by Alan Kay for Scientific American, named “Microelectronics and the Personal Computer“. In this article, Alan shows the system and unveils all its potential. Such a system was comparable, in that age, to the printing invention, radio or TV. Its main improvement was the ability to simulate an environment, to be used as a tool to rise human abstraction and trial/error capabilities.

Mr. Kay was also worried by the fact of all that potential could also be misused, in the same way that the fact for a city having a public library doesn’t automatically bring knowledge to its inhabitants, or broadcasting scientific TV programs doesn’t make the audience to become a scientific.

It’s a pity to see how some of the worst worries of Mr. Kay have become into reality. Nowadays children don’t use computers as a tool for world exploration and experimentation, but as a copy-paste machine, a hand bounded interactive movie.

It’s a pity to see how the hard work of teaching envisioners, like Seymour Papert, has been thrown away to the trash can. Learning tools, like the Logo programming language, have been dismissed, and new ones, like Squeak, are still unknown to the teachers nowadays.

We know what computers are today but, what could they have been?

It’s a sad week. Galicia, our homeland, is burning in flames. At this moment, more than 50 fires are burning without control. And the worst of all is that the main part of them are caused by men.

I can’t believe how such unresponsible and stupid people can exist. What kind of madness or obscure interests can force them to cause a fire started in some points at the same time, in order to be difficult to suffocate it? What’s the point of so many FEDER grants, so many improvements and innovations, so many animal repopulation and tree reforestation, if at the end there are people that don’t care about Galicia? 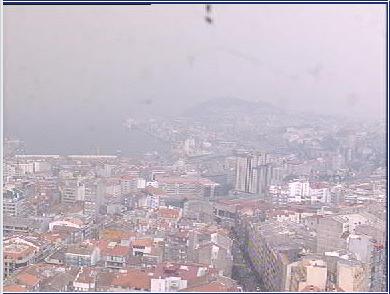 Igalia is renewing its corporate image. In the beginning, we decide to order the logo design to Jon Hicks (the creator of the Firefox and Thunderbird logo), but he was very busy and recommended us to get in touch with Denis Radenkovic, from 38one.com.

As the new logo was born, we are progressive changing all our corporate image: web, presentation cards, document templates… and even have decided to order t-shirts. Here is the result: 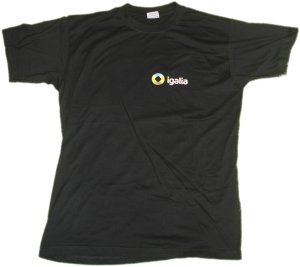 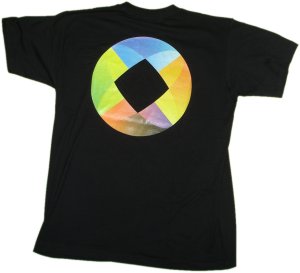 Past week I discovered a new radio station in the Vigo area while driving in my car. The point about that station is that it’s focused into English learning and the speakers are talking in English all the time. Listening to it is a good way to practice English listening and so get used to different English stresses (american, english and scottish) and levels (from children to high level).

The station can be tuned at 91.8FM or listened in internet through this Playlist (if it doesn’t work, try the direct stream URL). You can also visit Vaughan Systems main page or the Vaughan Radio page to get more information.