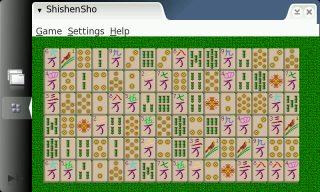 2 thoughts on “Shishen Sho Mahjongg for Gtk and Maemo”